I’m Not Flat, You’re Flat: 5 Pancake Compressors to Keep Everything in Your Home Inflated A pancake compressor is one of those tools that you don’t know you’re missing. And then when you do get one, you’ll wonder how you ever lived without it.

If you aren’t sure what exactly it is, an air compressor is a machine that converts energy from one of several different sources into power that is then transferred into pressurized air. That pressurized air is released in order to quickly inflate things or power up small tools in your home.

Once you have one in your house, you’ll be amazed at all of the little things one of these machines will help you do. Here are five pancake compressors that will quickly become your favorite tool to have around to get a variety of jobs done.

If you have a list of all the things you’re looking for in a pancake compressor, the Craftsman Six-Gallon Pancake Compressor will check all of the boxes.

This machine has, as its name says, a six-gallon tank to hold air. It has a maximum PSI of 150–one of the highest on our list–to ensure that you’re getting the pressure you need to do the jobs you want to do.

It’s oil-free (see our “Questions to Consider” section below for the advantages to that) and assembled in the United States. But probably our favorite feature and the thing that really sets it apart from others we considered is the 13-piece accessory kit that comes with the compressor. The accessory kit includes two blowguns, three inflater adaptors, a tire gauge, and a 25-foot PVC hose. It’s hard to think of anything extra you would need to purchase to get the most uses out of your pancake compressor.

The only downside that we can find with this one is that it runs louder than other ones on our list. But since the manufacturers of all air compressors strongly encourage users to wear earplugs no matter the noise level, we don’t think the slight increase in noise is enough of a deterrent to keep anyone from buying this machine. 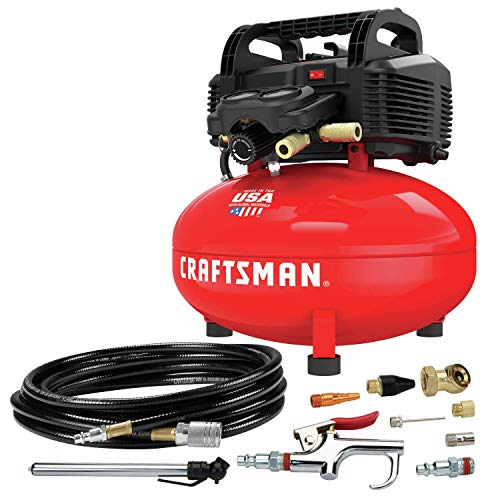 The Campbell Hausfeld Six-Gallon Portable Pancake Compressor is a close second on our list. It even edged out our top pick when it comes to noise: This one runs quieter than many others on the market. That’s a major selling point if you’re doing jobs in a quiet neighborhood or in close proximity to other houses.

We also loved the steel handle with its soft grip, making this one of the more easily portable compressors. It’s oil-free and has a dual-piston system, designed to give you better durability in the machine and better performance.

What kept it from claiming the top spot on the list was its PSI, which is a max of 125. Our top pick was higher, and in the end, when you’re using a machine like an air compressor to power tools and inflate tires, you’ll want one with a higher PSI to get the job done quickly and efficiently. We think that’s a better advantage than operating with less noise. 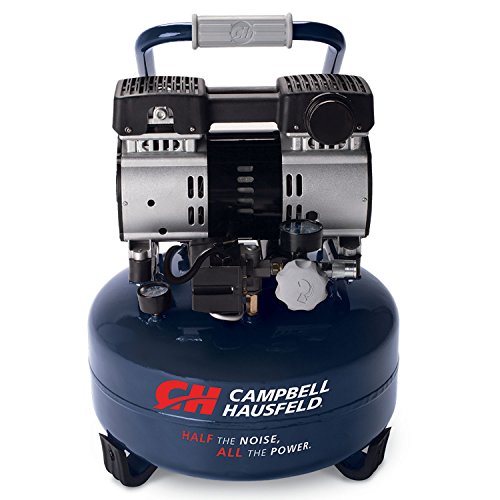 More of the Best Pancake Compressors

The DeWalt 2.5 Gallon Pancake Compressor is cordless, which makes it different from others we researched. Not requiring an outlet or a battery is a major selling point in portability, as is the smaller tank. This one only holds 2.5 gallons, where many others on the market, including the others on our list, hold up to six gallons. This means that at just over 21 pounds, it weighs less than others on the market. It does have a brushless motor, which will save you the cost of cleaning and replacing brushes over the life of the machine.

The disadvantages to the smaller tanks are a shorter running time and a lower PSI (135), something you’ll need to keep in mind, although we love that the compressor self-regulates to maintain PSI.

On the surface, this Bostitch Six-Gallon Oil-Free Pancake Compressor would seem to be the top pick. And it definitely has a lot of great features, some of which include the 150 PSI, the high-efficiency motor, and the flow regulator. But the trade-off for this one is that it’s noisier, heavier (just under 30 pounds), and more expensive than others on our list, and that’s without including other accessories as part of your purchase.

The low-amp and low-volt motor drew our attention to the Porter-Cable Oil-Free Pancake Compressor. Efficiency is a real advantage and this machine has it. It has a six-gallon tank and runs oil free. The console cover is upgraded, offering additional protection of the machine’s components and increased durability. This pancake compressor also comes with a one-year warranty.

One of the only drawbacks that we could find was the weight. This one weighs in at 34 pounds, which is up to 13 pounds heavier than other compressors on our list. We’ve said it before and we’ll say it again: Portability is a big reason why pancake compressors are so popular, so it’s a big deal when one is so much heavier than the others. 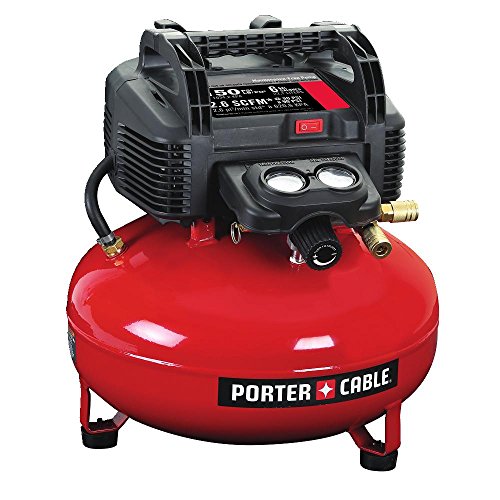 What are different uses for a pancake compressor? Among the things a pancake compressor can do is inflate your tires and balls, and power up small tools like a staple gun, a brad nailer, or a paint sprayer. Because of their small tank size, pancake compressors aren’t able to handle the larger jobs that other bigger air compressors can. The tools for those jobs require more air pressure and would rapidly deplete the pancake compressor’s smaller tank, increasing the amount of time you need to complete a task.

Since those are all good things, what’s the trade-off? Longevity of the machine.

The oil-free ones don’t require oil because their parts come pre-lubricated. This means that over time, they dry out and there’s nothing you can do about it. In a pancake compressor that requires oil, you’re adding the oil (lubricant) to the machine to keep the parts in good working order, which keeps the machine running longer.

How many gallons of compressed air does a pancake compressor hold? Like other tools, pancake compressors come in a variety of sizes. All but one of the compressors on our list above have six-gallon tanks, and that’s the largest size you’ll typically see. Because one of the main features of this machine is that it’s portable, making the tank any bigger would compromise that.

While it’s easy to overlook the need for a pancake compressor, we hope this post has shown you why you shouldn’t and helped enlighten you as to the better ones out there that you can buy. Comment below on additional uses for your favorite pancake compressor!